(Boise, Idaho)– Sgt. Dan McKnight, chairman of BringOurTroopsHome.US, a conservative group of Afghanistan and Iraq war veterans, today praised candidates running for U.S. Congress in Wyoming for pledging their allegiance to prevent unconstitutional wars. BringOurTroops.US sent out a pledge to every congressional candidate in Wyoming simply asking that if elected, they will uphold the constitution when it comes to war powers and insist that Congress exercise the Constitutional authority granted solely to the legislative branch to declare war.

“The veterans and their families who comprise the bulk of our membership of BringOurTroopsHome.US call on Congressional candidates in Wyoming to support a return to Constitutional principles,” concluded McKnight.

“Noticably absent…and not at all surprising…was that Representative Liz Cheney did not sign our pledge,” McKnight noted. “She has obstructed any effort that President Trump has made to bring our troops home proving again that she is worthy of the moniker The Butcher of Bethesda.” 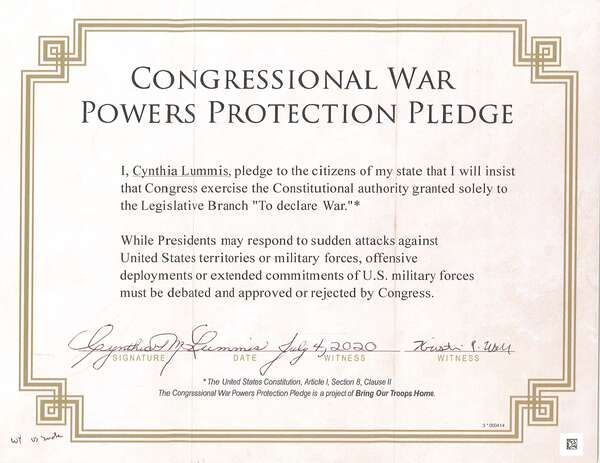