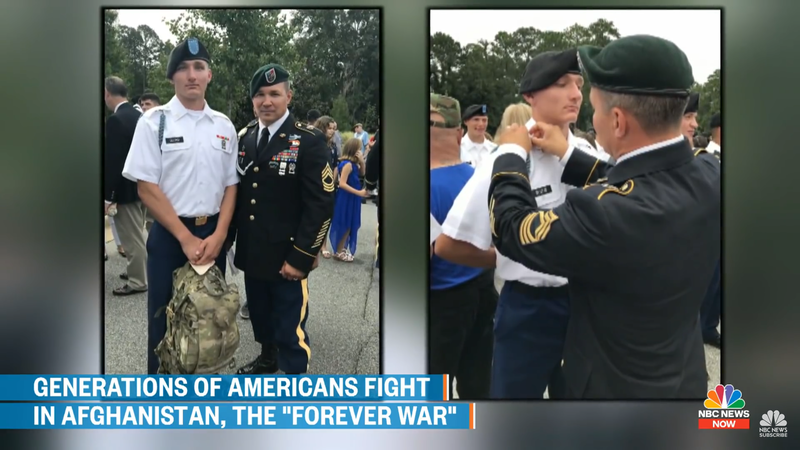 “We don’t talk about Afghanistan as much as we used to, but 19 years after the first U.S. troops deployed there, the war is still ongoing. And in some cases, parents who signed up and enlisted right after 9/11 are now watching their children being sent to Afghanistan. In some cases…they’re even going to the same bases,” reports Sarah Harman for NBC News.

This past December she interviewed Master Sgt. Trevor Deboer, who has a member of the Army National Guard has deployed three times to Afghanistan. In 2018, his son Payton, born in 2000, enlisted in the National Guard and has since deployed to the same base his father served at.

“Over time, the stated goal of U.S. involvement has shifted from rooting out the terrorists behind the 9/11 attacks and fighting Al Qaeda, to rebuilding the country and training Afghan forces,” continued Harman.

“We’ve had discussions as to why we were there,” said Trevor Deboer. “And it often came up as one answer, I’m here after 9/11 so my kids don’t have to fight this war. I had no idea that we’d be still fighting it 20 years later.”

“The dad, Trevor, he was really keen not to see his grandkids fight in the same war that he and his son did,” concluded Harman.