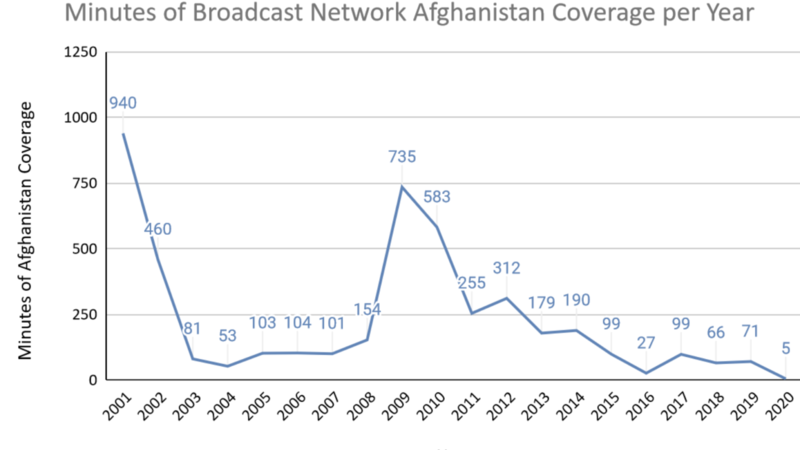 If the U.S. government was caught up short by the dramatic denouement of its 20-year war in Afghanistan, viewers of the three major networks must have been taken entirely by surprise.

Out of a combined 14,000-plus minutes of the national evening news broadcast on CBS, ABC, and NBC last year, a grand total of five minutes were devoted to Afghanistan, according to Andrew Tyndall, editor of the authoritative Tyndall Report, which has monitored and coded the networks’ nightly news each weekday since 1988.

Those five minutes, which covered the February 2020 Doha agreement between the United States and the Taliban, marked a 19-year low for Afghanistan coverage on the three networks’ newscasts. They compared to a high of 940 minutes the networks devoted to Afghanistan in 2001, all of it following 9/11 and the subsequent U.S. intervention, as shown below.

While the pathetic amount of coverage of the conflict last year can be partially explained by the virtually total dominance of the news agenda by the COVID-19 pandemic, the three networks devoted a total of only 362 minutes to Afghanistan in the preceding five years, or just two hours of coverage per network, or an average of only 24 minutes per network per year.