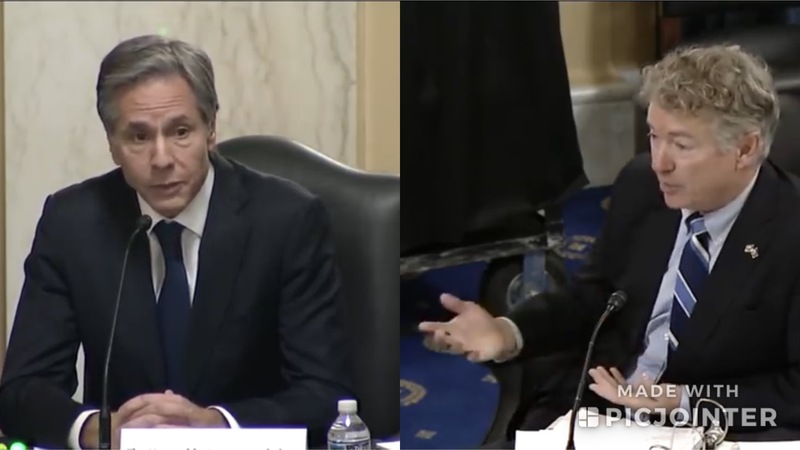 On Tuesday, January 26, Antony Blinken assumed office as the new U.S. Secretary of State. A week prior, during his senate confirmation hearings on January 19, Blinken was interrogated by Senator Rand Paul of Kentucky on whether or not he had learned responsible lessons from twenty years of endless war in the Middle East. Below is a partial transcript of their conversation.

SEN. RAND PAUL: “Thank you. Like Joe Biden and Hillary Clinton, you’ve been consistent supporter of military intervention in the Middle East from the Iraq war to the Libyan war to the Syrian civil war. Some on your side of the aisle, including president-elect have said well, we were given bad intelligence. They misled us on the intelligence on Iraq. That’s a very specific reason. There’s probably some truth to it, but I think it misses sort of the lesson of the Iraq war.

Likewise, your justification for maybe coming to a new approach on the Libyan civil war is well, maybe we overestimated the idea of having viable successors there. To me, it seems like we’re still missing the point because even after Libya, you guys went on to Syria wanting to do the same thing again and you argued well, maybe we just didn’t do enough. If we’d done more, we could have toppled Assad and we could have had real regime change in Syria.

Well, you got it in Iraq. You got it in Libya, and it’s a disaster. The lesson of these wars is that regime change doesn’t work. People say well, we’re going to get rid of the iron fist and Thomas Jefferson is going to arise from the ashes. Well that, you know, it is a naive notion to believe that Thomas Jefferson or his like live in Libya or live in Iraq. Their tradition is so much different than ours.

I mean, we’ve been fighting against centralized power in the English tradition for 1000 years. The revolution in England was 350 years ago. Ours was 250 years ago. That tradition they don’t have. They have a tribal existence. You trade one for another.

But mostly what you’ve gotten through the policies you have advocated and Joe Biden has advocated and, frankly, John Bolton has advocated, this idea of regime change has been a disaster for the Middle East. We complain, everybody around here is concerned. Iran, Iran, Iran. Well, why is Iran stronger? Who’s their best friend in the region now? Iraq.

You know, we did that. We had a balance of power. It wasn’t perfect, but we had somewhat of a balance of power in the Middle East and you guys messed it up. You got rid of the one bad guy and another bad guy got stronger. And so then you went to Libya and did the same thing and they said well, maybe is Libya is a one off. Well, maybe there’s a rule here. Maybe there’s something we can learn about regime change and maybe we can learn that humility would be that maybe we shouldn’t be choosing every government in the Middle East.

I would argue that instead of always choosing the governments, maybe we should not reward the bad ones. You know what I mean? So for example with Saudi Arabia, I despise the regime. I’d probably still trade with them. I probably wouldn’t cut them off completely. I wouldn’t sell many more arms. And after they killed Khashoggi, they shouldn’t have gotten one bit of our armaments.

Are any of the lessons you’ve learned from the failure of Iraq war, Libyan war, the chaos, the vacuum and more terrorism that occurred and more lives that were lost and then to go onto Syria. I don’t get that there’s been a lesson learned. Is there any kind of lesson learned on your part that regime change may not be the best thing for us in the Middle East?”

ANTONY BLINKEN: “Senator, I think we–we, and I certainly have an absolute obligation to try to learn from everything we’ve done, advocated to take into account the results and to make that informed how we think about these problems going forward. And I’ve done a lot of hard thinking about some of the very situations you mentioned. I’m proud of the fact that I have spent all the–my career during the times I’ve been in government for the better part of 25 years working to advance our diplomacy, to do everything we possibly can, to make sure that diplomacy is the first answer, not the–not the last answer and that war and conflict is a last resort.”

SEN. RAND PAUL: “That was Syria. The next step was the Syrian civil war, which looks a lot like the Iraq war and the Libyan war–“

ANTONY BLINKEN: “–Well, it’s–in Syria–in Syria, there were those who were advocating for a repeat of–of Iraq, which is to say a whole scale intervention. That’s something that I did not agree with. When we were looking at what to do in Afghanistan–“

SEN. RAND PAUL: “–But–but here’s the problem. In Syria, it’s–it is–there was a predictable result there. Had you gotten rid of Assad, who were the first fighters over there? Al-Nusra and al Qaeda, the most radical–the more radical you were, the better fighters you are. The program that you started with Hillary Clinton, the program to train the–these moderate rebels, we spent $250 million. We trained about 60. We sent 10 of them into battle and they were captured in the first 10 minutes.

It was a complete disaster. This whole idea that they there were moderates over there that we were going to support, doctors and lawyers and stuff, there were but I don’t think they were out there fighting. The ones out there fighting were jihadists, al Qaeda, al-Nusra, and if they had taken over the country–Assad is a terrible person. But I’m not positive that these people would have been better.

So I mean, it’s the same lesson. Our humility has to be let’s quit toppling regimes over there. Let’s don’t support the bad ones, but let’s don’t presume enough that if we topple them that in the vacuum, Thomas Jefferson is going to arise because it never seems to happen. With regard to advise and consent, and this is a little bit on Senator Barasso’s extension of his question on treaties. It really isn’t so much solicited solicitous move to say well we just can’t pass these treaties so we’re going to make all these agreements they’re not coming to you. But I would argue even more importantly on war.

You have argued when you have been part of administrations that, oh yes, you know, we’d like, like Senator Kaine’s a more narrow AUMF, but we don’t really need it. Now, you’re not alone. That’s sort of I think arrogant executive sort of attitude comes from both parties. Every president for the last 50 years, in fact, they all probably believe this. They believed they have absolute power.

ANTONY BLINKEN: “I think the AUMF from 9/11 has been used in countries and against groups that were not contemplated or cited in the AUMF, which is the very strong reason why we should revisit it.”

There is no authorization for war in Somalia, Mali, Yemen, which the Obama administration originally did support. So there–there really isn’t. And I’m not for a more narrow one, I’m just for no more war over there. I’m tired of all the war. I’m tired of all that nation building.

Look, I love the rights of women as much as anybody. But if our goal is going to be that we are going to make women in power like in Saudi Arabia. We’re going to go to war with Saudi Arabia because they don’t have women ministers of health and stuff, you know, it really is–isn’t exactly our national security that you’re talking about. You’re talking about something different.”