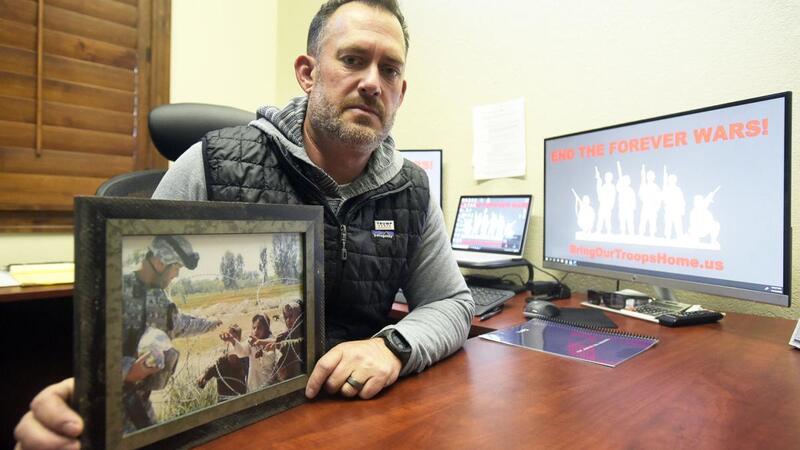 Nine months after graduating from Capital High School, McKnight walked from his apartment in Boise’s North End to the Marine Corp recruiter’s office and signed up. He started in the Marines, and a short time later, transferred to active-duty Army for three years. After coming back to Idaho, McKnight transferred into the Idaho National Guard. McKnight, now in his 40s, served for 13 years total.

“I was part of something that meant something,” he said.

While in the National Guard, McKnight deployed to Louisiana as part of the response to Hurricane Katrina. On the way home to Idaho, his unit received its orders to leave for Afghanistan.

He described his time in Afghanistan as 1% engagement, 99% wasting time. Sometimes, there were extra challenges, like trying to find basic gear.

“Using the National Guard in war is a new thing. We had trouble getting basic gear, boots, goggles. Chain of command failed us,” he said.

At a friend’s urging, McKnight called then-Governor of Idaho Jim Risch for help.

“I climbed to the top of a hill on this mountain, you could see mortars and artillery going off, helicopters going by,” he said. “It was like a movie.”

The new governor picked up the phone. McKnight explained the situation, and Risch told him he’d see what he could do.

Forty-eight hours later, McKnight received a call from his chain of command: the supplies were on the way.
“He delivered. Not many people in the world would do that,” McKnight said.

McKnight was injured in Afghanistan and returned to Idaho in February 2007. He was medically retired in August that year.

McKnight watched as Risch, elected to the U.S. Senate in 2008, became chairman of the Senate Foreign Relations Committee in 2019. He appeared to support bringing troops home, then voted to keep troops in Syria, Afghanistan and Yemen last year.

After that and a few disappointing meetings with other members of Congress, McKnight decided to try to influence Risch from home, and harness the power of the states. He founded Bring Our Troops Home (BOTH) in 2019.

The organization has about 30,000 members in 26 states, most of whom served in the War on Terror. BOTH is currently focusing on legislation at the state level called “Defend The Guard,” which would require a congressional declaration of war before state National Guard troops could be deployed by the governor.

“From a constitutional standpoint, Congress hasn’t done their job,” McKnight said. “We believe there is a time and place for war. If it’s so important we use the military, Congress should put their name on the line.”

McKnight said his deployment in response to Hurricane Katrina was a result of the Louisiana National Guard’s absence.

When McKnight thinks of Veterans Day, he doesn’t feel his “99% boredom, 1% fanatical craziness” is worthy of recognition. He said it’s more about reflecting and reconnecting with the men he served with.

“We tell the same bad stories, and the older we get, the better we were,” he said.

McKnight said if Americans really understood the meaning of Veterans Day, there would be no need for things like discounts and free food.

“I don’t want to go to Applebee’s and get a free appetizer. That’s not my thing,” he said. “I appreciate a nation that wants to honor their veterans, I just wish they would do it in a way that was more meaningful.

Read the rest of this article at Idaho Press