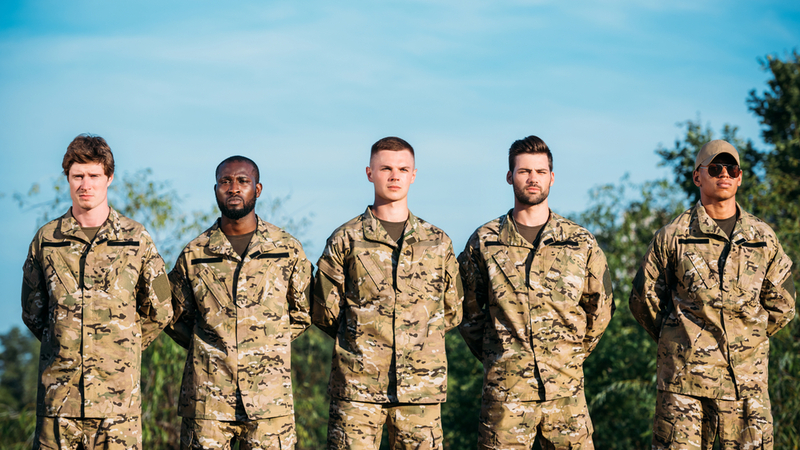 On the morning of Jan. 20, two divisions’ worth of National Guard troops — around 26,000, according to National Guard Bureau data shared with Military Times — from 50 states and three territories stood watch in the nation’s capital for the inauguration of President Joseph Biden. Some even rode the Metro to their posts, helmets on and rifles slung.

At the same time, another two divisions’ worth of troops — 23,000 soldiers and airmen, to be precise — were donning their masks and other protective equipment to continue the fight against the COVID-19 pandemic.

And yet another 34,300 National Guard troops, the equivalent of another three divisions, woke up that day deployed overseas, guarding the southwest border, or otherwise mobilized under Title 10 federal authority.

And much like how the Allied assault waves kept coming into the Normandy beaches that day, the activations have kept coming for the National Guard over the past year.

Though many of the troops activated on Jan. 20 have since gone home, the high operational tempo won’t let up any time soon for the Guard’s 441,000 soldiers and airmen.

Fears of continued unrest will keep more than 5,000 Guard troops on duty in Washington D.C. through at least mid-March, including the entirety of the D.C. National Guard, according to an orders memorandum obtained by Military Times. The DCNG will be on duty through March 31, officials say.

Meanwhile, the number of Guard troops committed to the COVID-19 response stands to increase in the coming months as states mobilize additional troops to implement Biden’s official COVID-19 response strategy, which highlights the Guard as a key resource for governors. As part of the strategy, Biden increased the federal reimbursement to the states for pandemic-related Guard activations to 100 percent after the Trump administration had previously reduced it.

At the onset of the pandemic, when the federal government was fully reimbursing the effort, the number of guardsmen fighting COVID-19 peaked at 47,100 in mid-May, according to NGB data. It’s not immediately clear whether a surge in activations for vaccine distribution and administration would eclipse the previous peak, but experts around the country are calling for their role to increase.

The National Guard isn’t going home any time soon. And its leaders are starting to worry about the potential impact of this operational strain on the troops, their families, and their employers.

One senior leader who has publicly expressed concern about the recent pace of activations is Maj. Gen. James Eifert, the adjutant general of the Florida National Guard. He testified Tuesday to the Florida Senate about how his force doesn’t have enough soldiers to shoulder the demand. Florida Politics first reported Eifert’s comments.

“We cannot adequately support the state’s citizens on Florida’s [hypothetical] worst day with the size of our National Guard at this point,” said Eifert.

He cited the fatigue of current Guardsmen as one of the most pressing needs to expand his force.
“The other thing that is really exacerbated the problem for us as well is the high operational tempo of our guardsmen at this moment,” Eifert explained to legislators. “You can only go back to that well so often because these are volunteers.”

“We’re really concerned on the back end of this…How much are their employers and families going to be willing to allow this to continue with the demand that it’s put on our soldiers?” asked Eifert, raising the question of whether his troops could handle the continued burden of what Florida and the country required of them.

Eifert pointed to the pandemic response, two deployments to D.C., hurricanes, local support to law enforcement, and the current overseas deployment of ten percent of his force as stressors that aligned in 2020 and have continued into 2021.

Read the rest of this article at Military Times