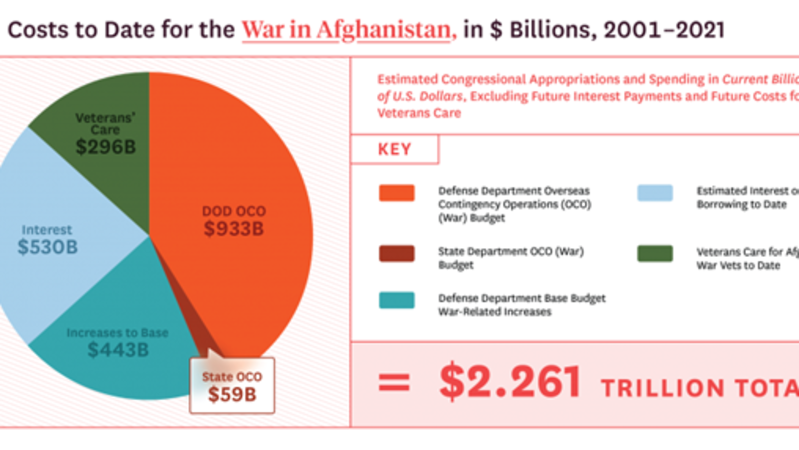 The Brown University Costs of War Project just released an analysis showing that the Afghanistan War has now cost the US at least $2.261 trillion, roughly $16,000 per federal taxpayer. (The breakdown of this spending is shown in the graphic below.) But the report notes that these costs are if anything an underestimate because the figures don’t include the money we are obligated to pay in future healthcare costs for Afghanistan veterans nor future interest payments on the money we borrowed to finance the conflict.

Moreover, Brown reports on the human toll the conflict has taken.

The analysis estimates that 241,000 people have lost their lives in the Afghanistan War, including 2,442 US military service members, nearly 4,000 US contractors, and more than 71,000 civilians. And, once again, these figures are likely underestimates, because they don’t include indirect deaths due to hunger, disease, water shortages, and more that stem from damage done during the war.

This new report is just another reminder that the full scope of the war in Afghanistan’s human and economic costs is beyond the mind’s ability to grasp. Anyone arguing we should perpetuate the war forever must grapple with the extraordinary toll our involvement has taken.