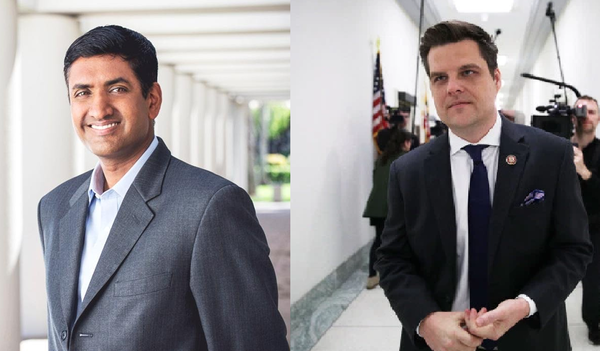 After awakening from a deep slumber on war and peace, Congress is erecting new roadblocks to prevent our troops from returning home. As a pandemic endangers Americans at home and abroad, it’s all the more incumbent upon Congress to keep troops out of harm’s way. But instead of preventing us from getting into conflicts in the first place, lawmakers are fencing our troops in overseas bases and battlefields to fight unwinnable wars.

The House Armed Services Committee included in its annual defense bill two measures restricting the president from withdrawing troops abroad. These amendments would handcuff the administration from bringing our troops home from Afghanistan and Germany without first certifying a dizzying maze of stipulations.

Lawmakers voting for these restrictions cited Russian aggression as the latest justification to block President Trump’s planned withdrawals. But Putin must not get to determine the timeline for when American troops return home. After nearly two decades of shipping American flag-draped caskets from Afghanistan, the withdrawal of our brave men and women in uniform — while they are still alive — is long overdue.

U.S. troop encampments at Cold War-style garrisons were designed to stop Soviet tanks from invading Germany — not to confront the challenge Russia poses in the 21st century. Neither the 34,500 U.S. troops in Germany nor the more than 25,000 NATO — including thousands of American — soldiers in Afghanistan have deterred Russia’s latest acts of aggression. Containing Moscow requires strengthening our capabilities to comprehensively counter potential cyberattacks, political interference and its hybrid warfare tactics in Crimea, eastern Ukraine and Syria.

Troop withdrawals have long been championed by leaders across the partisan divide. After Reverend Jesse Jackson capped his historic 1988 presidential campaign, he addressed the Democratic National Convention, warning against “spending $150 billion a year defending Europe and Japan 43 years after the war is over.”

During the Cold War, there were about 270,000 U.S. soldiers in Germany. Since the fall of the Berlin Wall, every American president has ordered troop withdrawals from the country. President Bush ordered the departure of 30,000 troops from Germany in 2004, while President Obama ordered the withdrawal of thousands more.

Congress must conduct meaningful oversight of any administration’s withdrawal decisions, to ensure that troop withdrawals are in the service of our national security rather than an attempt to either punish or reward another country. Lawmakers should encourage sustained diplomacy to secure regional stability — an element noticeably absent from these provisions included in the Armed Services Committee’s defense policy bill. We should encourage responsible withdrawals and avoid impetuous decisions. But it is the height of irresponsibility to obligate our troops to fight unwinnable wars and delay their return indefinitely.

Fortunately, a re-energized coalition of progressives and conservatives is galvanized to bring our troops home. One of us is one of the President’s leading critics, and the other is one of his closest allies. We are united in our conviction that Congress should lead efforts to disentangle our troops from bloody and costly endless wars.

The same night these anti-withdrawal measures passed in the Armed Services Committee markup, we teamed up on an amendment blocking U.S. support perpetuating the Saudi-led war in Yemen. In last year’s defense bill, we co-led a provision with overwhelming bipartisan support to prevent an unconstitutional war against Iran.

These victories are only possible because millions of Americans are mobilizing for change. From conservative advocates like Concerned Veterans for America and Americans for Prosperity to progressive champions like Win Without War and FCNL, the American people are demanding Congress bring our troops home and focus on the threats facing Americans today.

Under pressure from Washington’s armchair hawks, troops withdrawn from bases in Germany and battlefields in Afghanistan may simply be re-deployed to other wars and military bases abroad. The task of ending a nearly two decade, two-trillion-dollar war, and re-evaluating America’s troop presence in Europe faces stiff opposition from the Washington blob that cut its teeth on antiquated Cold War politics of yesteryear.

Yet, unlike those beating the drums for war, we have the American people on our side. Americans of every political stripe are calling on Congress to celebrate, rather than shun, our troops’ well-deserved homecoming.