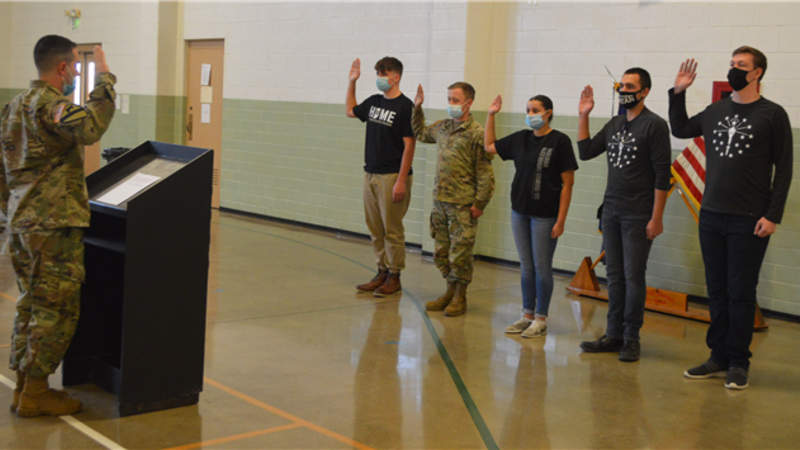 Five Army National Guard soldiers retook their oath of office Saturday in front of friends and family at the Warsaw armory [Indiana].

Lt. Erik Holloway gave the enlistees the oath, which says, “I (their name) do solemnly swear (or affirm) that I will support and defend the Constitution of the United States against all enemies, foreign and domestic; that I will bear true faith and allegiance to the same; and that I will obey the orders of the president of the United States and the orders of the officers appointed over me, according to regulations and the Uniform Code of Military Justice. So help me God.”

National Guard recruiter SSG Michael Cole explained why the oath was given to the soldiers again at the armory Saturday.

“Today we had five of our newer soldiers come in so that they could resay the oath. They’ve already said the oath at MEPS (Military Entrance Processing Station), however, since COVID, MEPS has been closed so the friends and family members haven’t been able to go and watch their loved ones swear-in to the National Guard, or any branch of service,” Cole said. “So one of the things that we wanted to do and provide was an opportunity for their family and friends to come in and actually see them take the next step in their life and their job and their journey within the National Guard.”

Cole said they, the families and friends, were invited to the armory during the soldiers’ drill weekend so they could witness the soldiers take the oath.

Read the rest of this article at Times Union Online